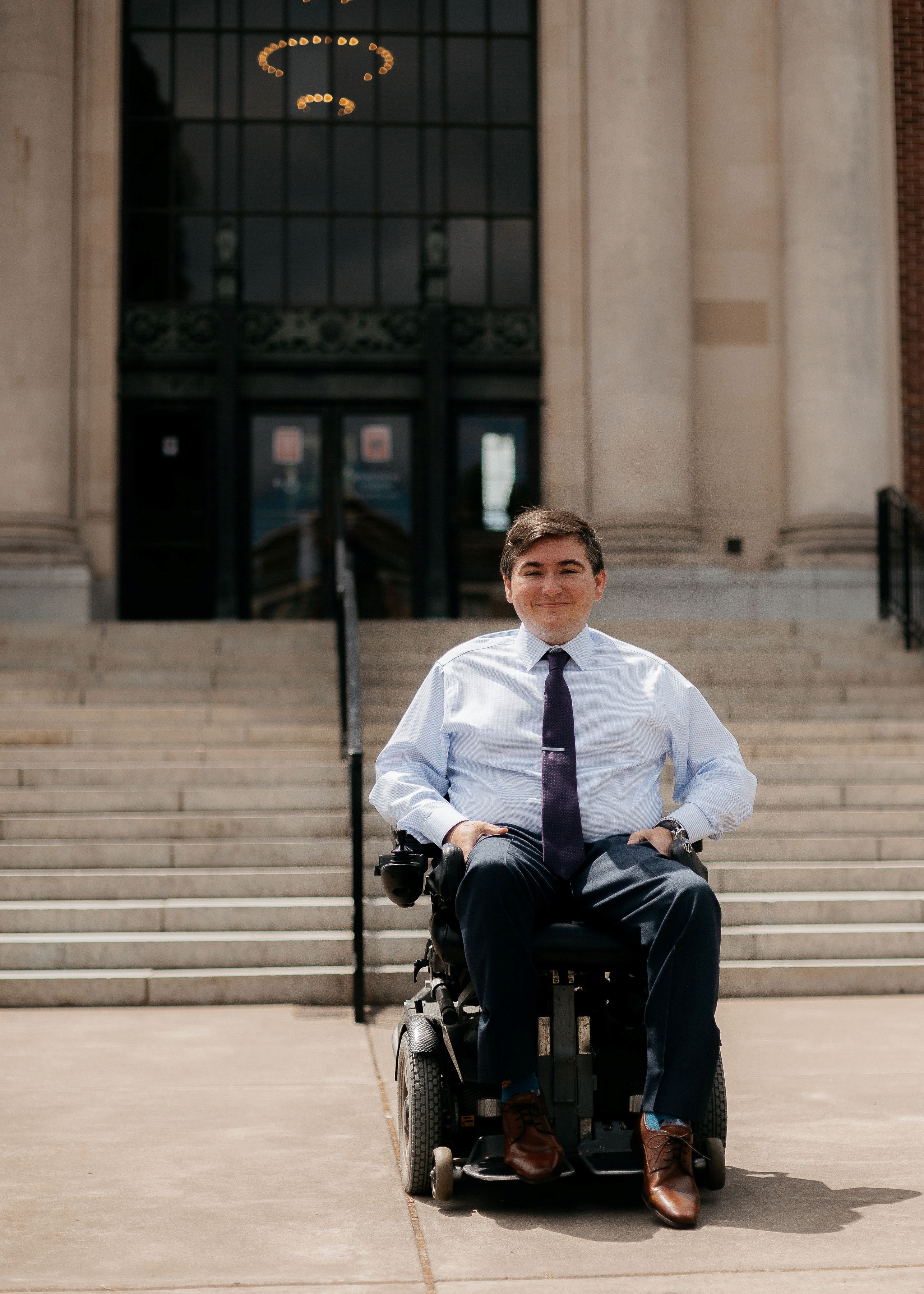 This interview was conducted pre-pandemic.

When I met Thomas he was already smiling. I told him I was writing some new stories for the DAS website, that I had a few questions, but that really, I just wanted to know about him as student. By the end of our conversation, I had a copious amount of notes, a greater understanding of the Humanitarian Engineering Department, and a much better picture of a student who is deeply involved on campus. Our conversation started with discussing his receipt of the Rice Scholarship and the way that has helped him with the expense of school as an out of state student, but quickly moved into discussing his academic focus. Thomas told me that he was a Computer Science major with a Humanitarian Engineering minor, to which I asked, “what exactly is Humanitarian Engineering?” He gave a straightforward explanation; it focuses on engineering solutions in relation to special needs groups and the developing world, focusing on sanitation, water treatment, transportation, and user-oriented design. He went on to list the projects, internships, and groups he is involved with, including but not limited to the Honors College, Adaptive Technology Engineer Network (ATEN), the Social Mobility Lab, Muscular Dystrophy Association, and a Google BOLD Internship.

We talked about how his goals have changed in time at Oregon State. He is more interested in working in something that he cares about, that he’s passionate about, and that helps underrepresented communities. For him, this has manifested in adaptive technology as he’s worked on building it for both himself and others. His work building modified ride on cars has informed much of his other interests at Oregon State and how he sees himself going forward. Thomas focused on this work for his Honors thesis which he completed and defended Spring of his sophomore year. He hoped to publish this work in the future. He also hoped to continue work around adaptive technology and cited his work with his bosses and mentors at Oregon State and others as being responsible for his change in mindset around disability. When I asked him how disability has informed his work in college, if it has at all, he told me his view of disability has significantly changed in his time at Oregon State. He said that he has come to see disability as an asset, and in many cases it is a hot commodity for companies that are looking for ways to approach projects with access and underrepresented communities in mind. His work the College of Public Health and the Social Mobility Lab helped him realize he wanted to work around disability and help people. Seeing his work come to fruition and children playing and using it is serves as evidence to Thomas of his direct impact. Much of what he does is based in wanting to see his work come to fruition and seeing that impact. His future goals are based in wanting to continue that impact, whether it is working in the accessibility department of a company, working at a non-profit, or striking out on his own.

He has already made a variety of connections at Google. Thomas said they are very progressive around disability considering their size, and that they want and encourage the perspective of people with disabilities. He worked with Google as a part of their student program his sophomore year at Oregon State. He worked for their Coding program CodeU remotely under their mentorship and was preparing for the Google BOLD internship in summer 2020. His freshman year he received the Lime Connect Google Scholarship. Lime Connect is a non-profit that is focused on highlighting disability through achievement and connects students with disabilities with leading corporations for fellowship, internship and scholarship programs.  Thomas described it as an internship where business meets tech, focusing advertising solutions for customers. Thomas noted that the opportunities that he has had through the Honors College and OSU generally have allowed him to pursue what he truly enjoys in a meaningful way. Thomas said that “OSU has been a big chance for him to grow” and to explore what he wants to do and put it into action and working in this field has been great.